Many products start as self-contained boxes of code. Eventually, third-party products need to be integrated: a payment processor, a shipping distributor, an advertisement provider, etc. All of the sudden, what used to be a stable self-contained box becomes a network of dependencies between different entities distributed across the globe where every single link is vital to the business’ success. API providers have their own business goals and follow their own timelines. They are not responsible for the success of your business. Moreover, with very little effort they can destabilize your product and cause significant business damage. Product stability is ultimately the responsibility of API consumers. The following are recommendations to maintain successful and stress-free API integrations. They are lessons learned after many years of painful integrations.

TL;DR: API integrations can be streamlined with the creation of a few environments where automated tests are run. Jump to the end to see the proposed design.

Eventually, a Third-Party API needs to be integrated. These APIs are developed outside the boundaries of the organization. Although companies have very little control on how API providers design their APIs, the benefits of an integration usually outweigh the costs and save the business uncountable hours of work. 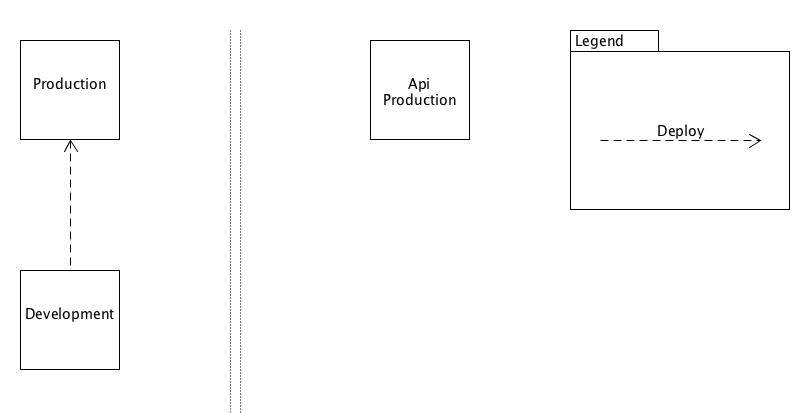 API integrations are rarely developed against API Production environments. Developers don’t want the tests to be spending real money or affect their credit score. API providers usually provide an API Sandbox which is a clone from their latest Production code. This environment should be immediately refreshed after API Production deployments.

Development tests are run against the API Sandbox. It is also used as the template to build the integration code.

Once development is complete. The code is promoted to Production to start consuming the Production API.

At this point there should be no surprises in Production because all the tests passed against the API Sandbox. The better the API Sandbox is the seamless this process will be. How often should the tests run?

These API Integrations seem to be a lot of work they surely take tons of time. Are they really needed? Why can’t we just develop everything we need in-house? 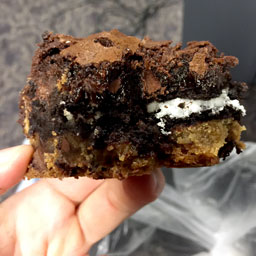 Mary has decided to sell her famous Oreo layered brownies online. In spite of her little knowledge of HTML she is able to build a website to showcase her delightful layered sugary creations. However, Mary is not well-crafted enough to build a payment processor, she does not want to deal with credit card fraud, PCI compliance, customer wallets, etc. She just wants to sell brownies.

The fastest way for Mary to accept payment for her brownies is to consume a payment provider’s API (such as Stripe, or PayPal). She is going to leave payment to the experts in the field to focus on her field of expertise: Brownies.

On a different scale, larger companies don’t want to spend the time and energy necessary to build everything they need to run their businesses. API integrations are generally faster than building the required functionality from scratch. 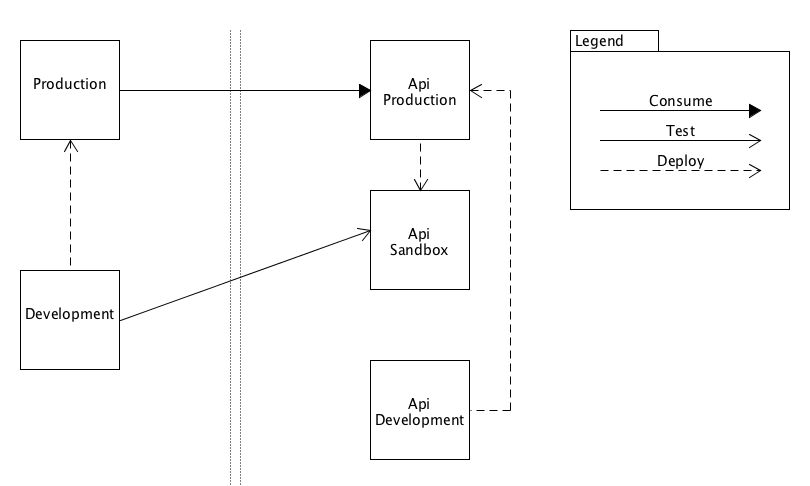 Although API changes should always be backwards compatible, this is not always the case. There is no way for the API consumers to know if new API changes will break something until is too late and the changes are already in API Production. Moreover, there is no way to know when new changes to the API are promoted. 2

An effective solution is for API providers to expose their API Development environment so consumers can run their own tests and validate everything is ok before any API changes get promoted. 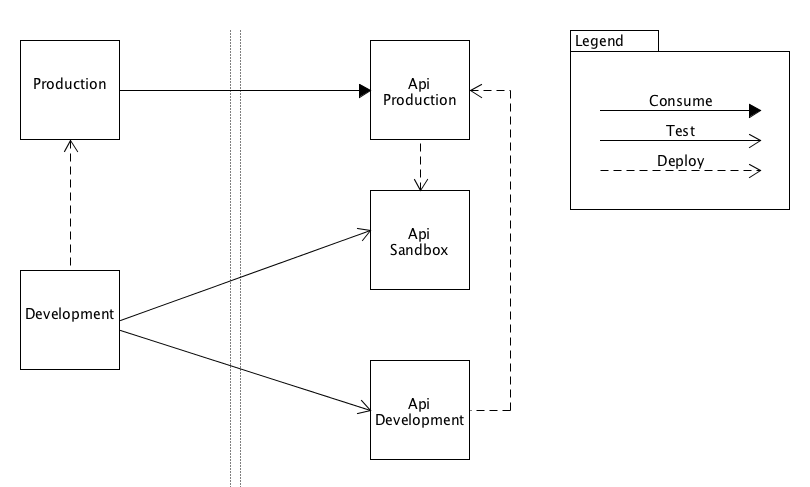 Some may be tempted to think this API integration model is only for web projects, it is nevertheless a platform agnostic model. 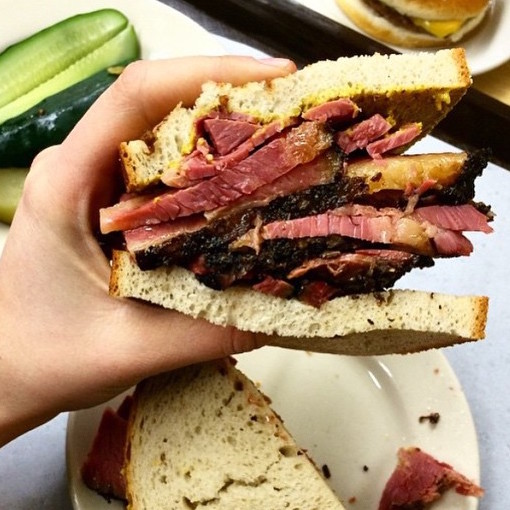 A couple of years ago I was part of an initiative to develop a Point of Sale (POS) system for a major fast food chain -let’s call them Tube Sandwiches Inc. (TSI)-. This system was composed of several subsystems developed in parallel by a handful of companies distributed across different countries. One of the key features of this POS was accepting credit card payments for the sandwiches.

The payment subsystem -let’s call it POSPay- was developed as a black box by a company from Canada called CheckFly -not their real name-, they used a different programming language and very different development methodologies. 3 However, it was our responsibility to maintain the overall stability of the system, specially the payment system integration. There are scientific studies to prove that giving away the sandwiches for free could potentially hurt the business. [citation_needed]

There were times, during these certifications when we encountered errors and incompatibilities. When these showed up we weren’t sure where they came from. Sometimes we blindly blame the Canadians only to find out a couple of days later it was not their fault. Other times we spent days trying to find a root cause, and then, a couple of days they used to send a new build with some enhancements. This was a very difficult situation. We had to spend countless hours validating something out of our control.

API incompatibilities can bring your business to a halt. What is worse, these errors are usually found by end users. It should be a priority for API consumers to ensure integrations are as stable as the rest of the codebase.

When API changes break in Development there is no guarantee that they will break Production. Remember Development is constantly changing too. Sometimes API changes are incompatible by design and require new changes on the consumers side. Both, API consumers and API providers need to go through great lengths of code review and jump a lot of hoops to make sure nothing will break. In these scenarios there is a good deal of finger crossing and guessing before going to Production. Guessing is a very bad development model. [citation_needed]

There is a clear need for a new environment on the API consumers side. A Production Sandbox with the same code that is currently running in Production. This environment will get refreshed after every Production deployment.

API consumers can run the tests from the Production Sandbox environment against the API Development environment. These tests will fail when upcoming API changes will break Production. Moreover, they clearly indicate whether the error is in the consumers or the API providers’ side. 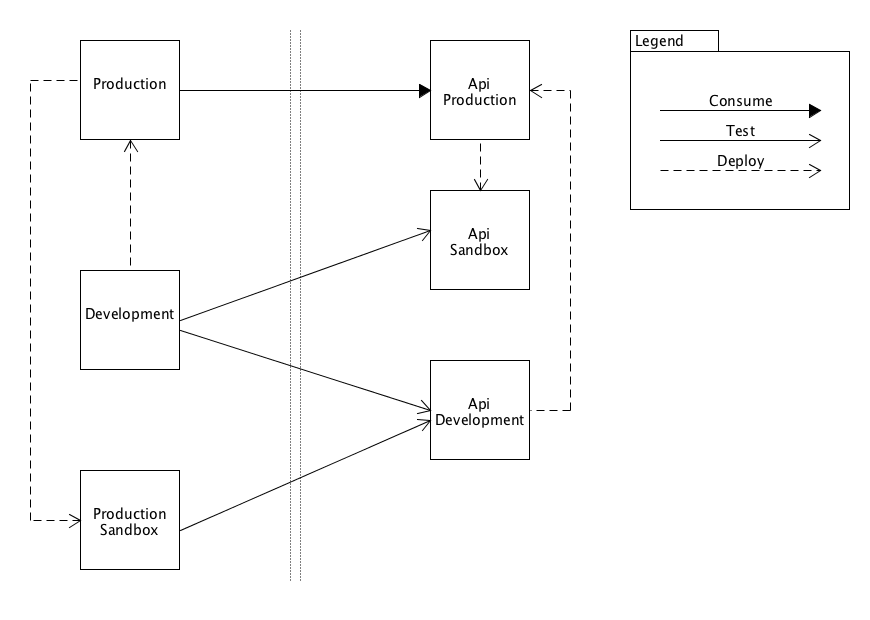 It’s not you it’s me

There was a turning point during one of the many POSPay certification tests when we started by testing the latest stable version of the POS against the POSPay development version they wanted to certify. These were our Production Sandbox - API Development tests. They helped us quickly pinpoint if the upcoming build was backwards compatible. At some point, we even shared the test scripts with CheckFly so they could run them before starting the certification of a new release.

Sometimes API providers need to release incompatible changes: new security regulations, new usage limits, etc. This is the worst case scenario for API integrations. API consumers cannot update their code to conform to the upcoming changes until they are released. Moreover, consumers cannot wait until the new changes are released to start modifying their code because that would significantly impact their businesses. This is a very hard Catch-22 situation where the solution is part of the problem.

Some API providers solve this problem exposing multiple versions of their APIs giving consumers enough time to migrate. On the other hand, some API providers cannot do this. The following is a safe remediation plan for these very hard scenarios.

1- Incompatible changes are released to the API Development environment. They usually have a projected production release date in the future. 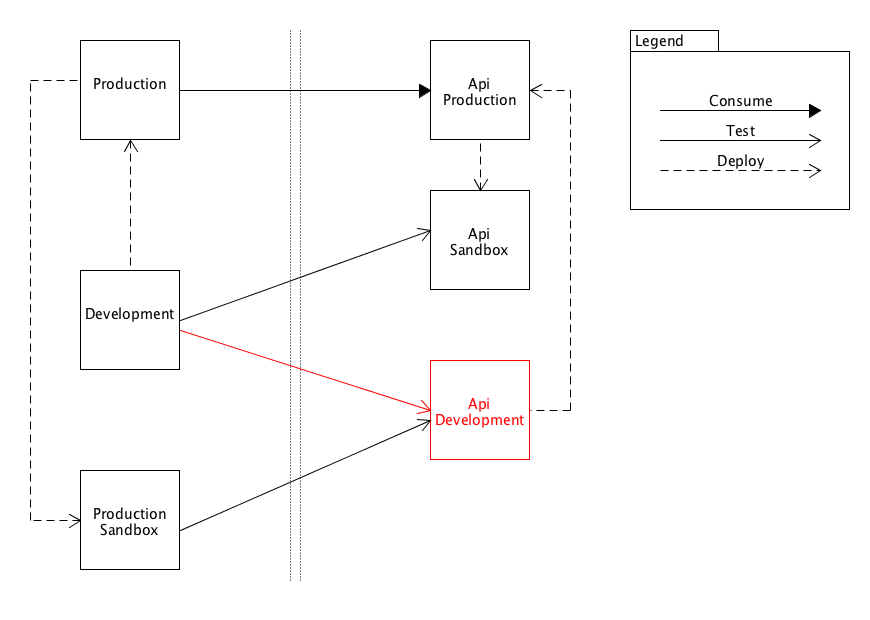 3- The Production Sandbox - API Development tests break. This failure clearly indicates the failure is on the API side. 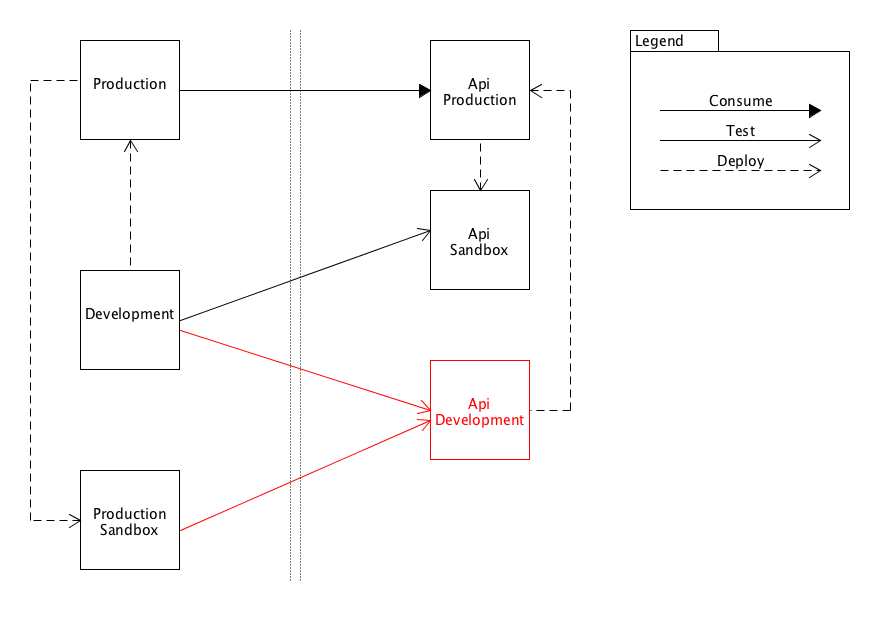 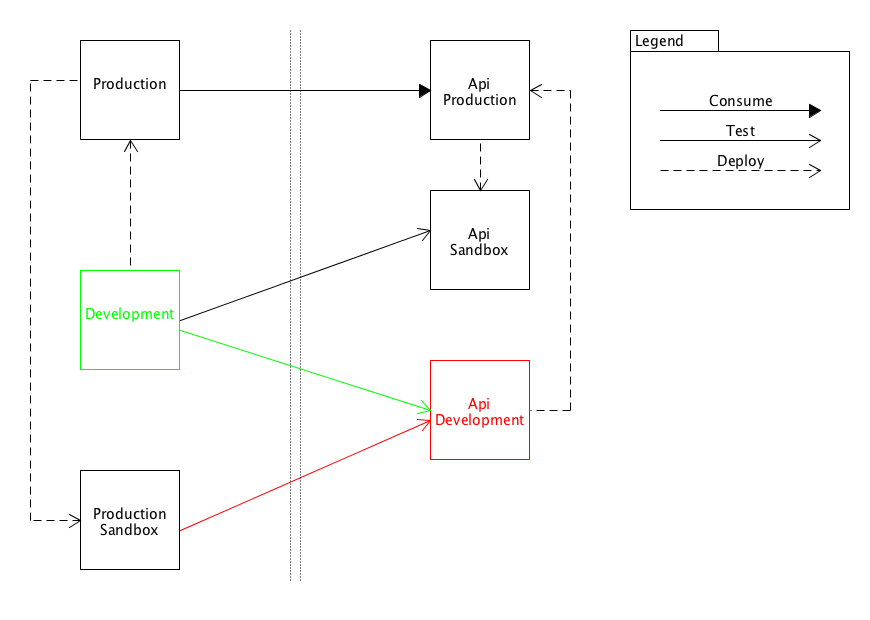 5- Since the upcoming API changes are incompatible the Development - API Sandbox tests break. 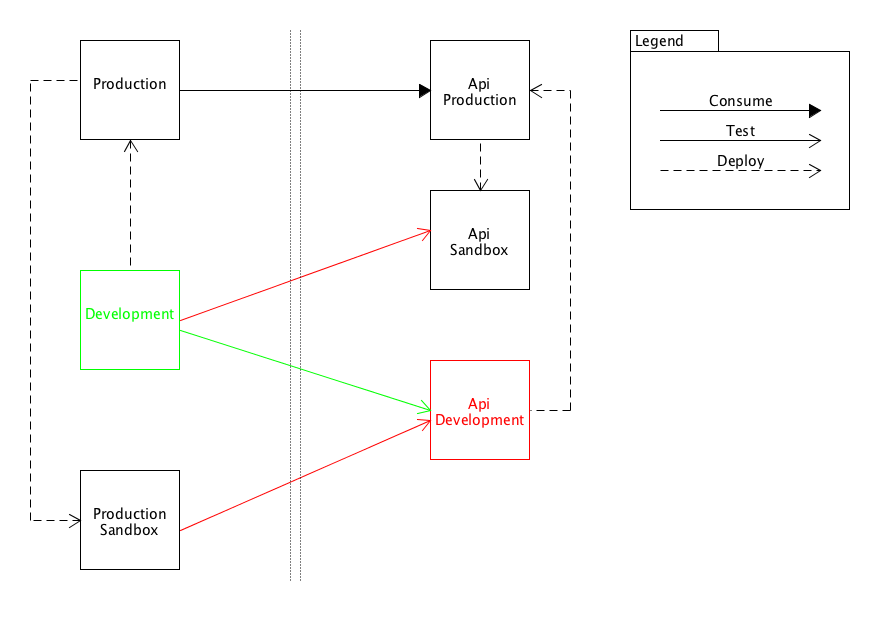 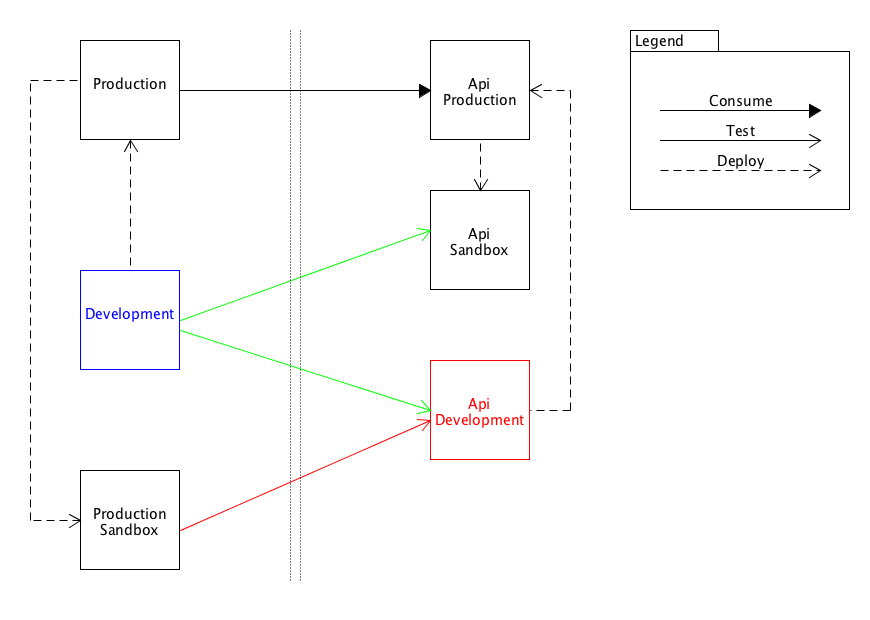 7- Deploy the code from Development to Production. 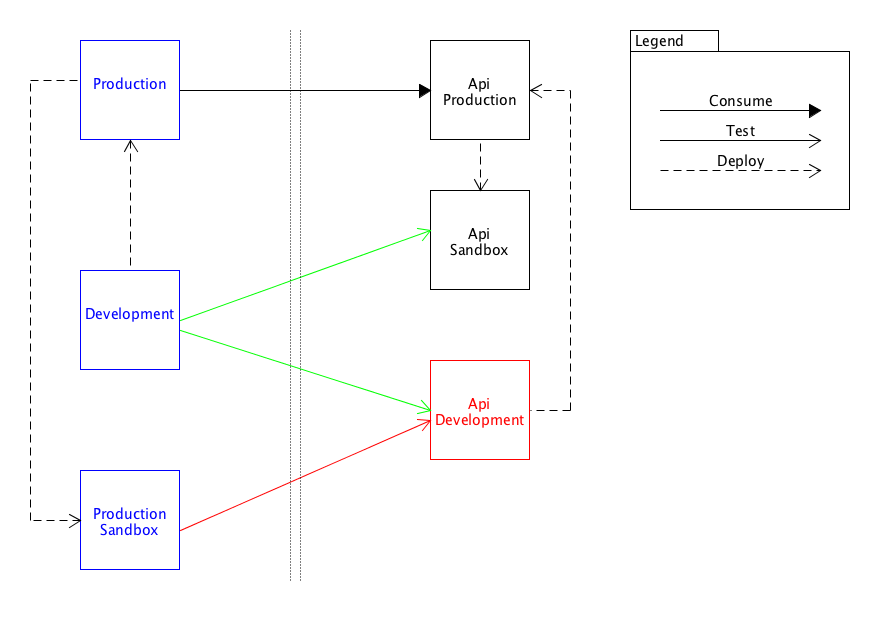 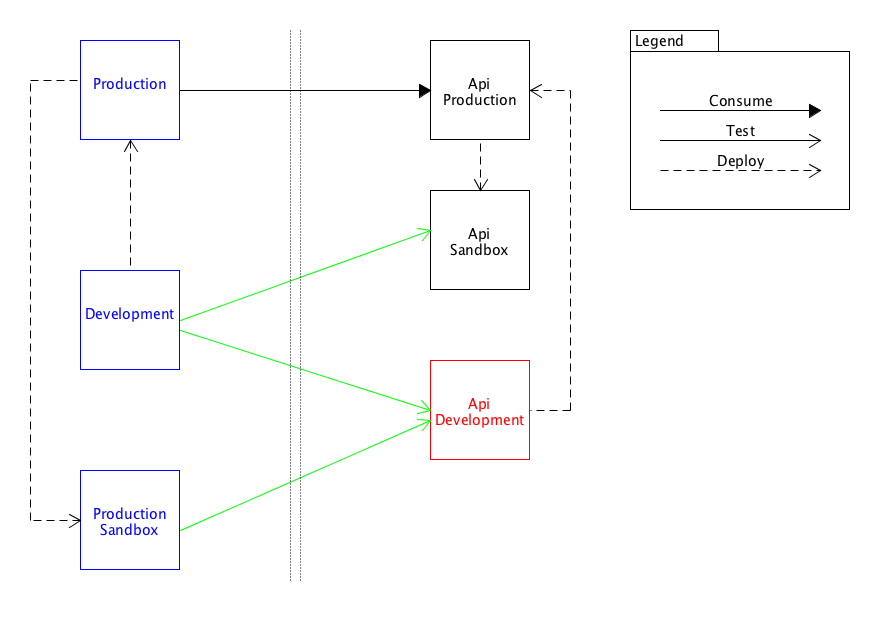 9- The API providers can release their changes at their own will and no outage will be experienced.

Third-party API integrations bring a lot of value to businesses. However, they also add a lot of complexity and risk to the Software Development Lifecycle. The creation of the described environments is a remediation technique to prevent outages caused by API integration errors.